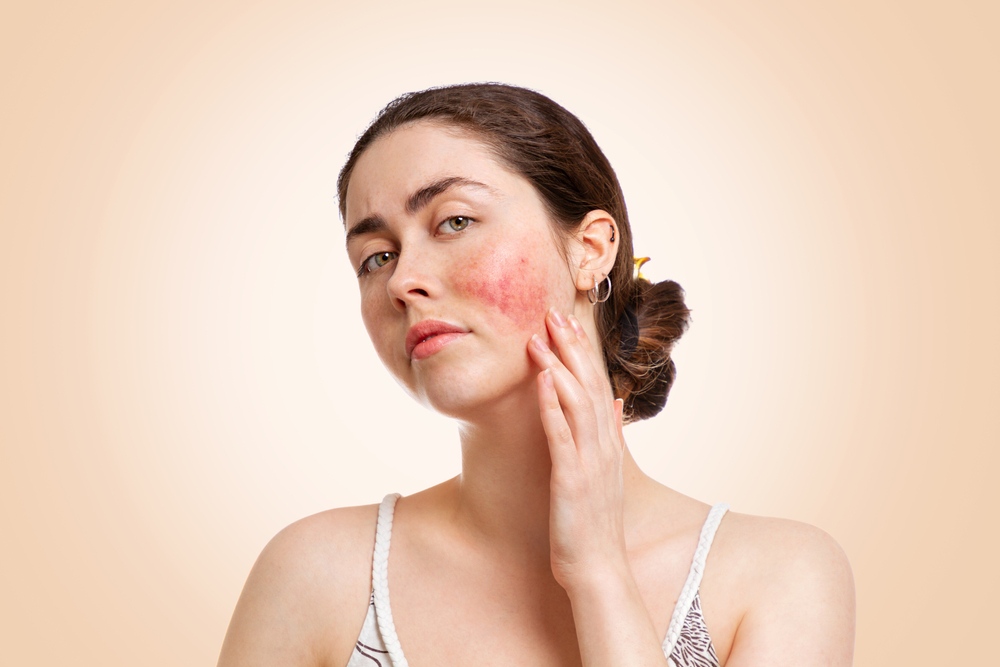 If you’ve ever wondered about your inflamed or pink-toned skin, you have brushed it off as a short-term infection or allergic reaction that was bound to go away. But if you soon realized that this redness was not either of those, and were left even more confused, we’re here to point out another potential answer – rosacea.

Rosacea is a common inflammatory skin condition. You’ve most likely either experienced it yourself at a young age or noticed others who have it as a common symptom is facial redness, easily flushing of the cheeks or face “blushing”.

There are different causes, types and symptoms of rosacea as well as many different types of rosacea treatments and ingredients to avoid. We’ll cover everything you need to know below.

Rosacea is a chronic skin condition that most commonly affects facial skin. Rosacea affects over 14 million people in America and may worsen over time if left untreated. It is an inflammatory skin condition that is often mistaken for eczema, acne, or a skin allergy due to their similar symptoms. Although there are numerous causes, they are not fully understood and that means that there is currently no cure for rosacea, however, there are many ways to treat and relieve rosacea symptoms.

There are four types of rosacea, each with their own onset of symptoms and an individual may experience more than one type simultaneously at a time. The most common signs and symptoms of rosacea are the small, red bumps on the skin that are filled with pus. They usually flare up on the facial skin of your cheeks, nose, and forehead. People with rosacea experience cyclical flare-ups, meaning that you will experience ongoing symptoms ranging for a week to months at a time. The symptoms will fade away, and then may also return.

The Four Types of Rosacea

The American Academy of Dermatology depicts four types of rosacea. These four types are characterized by varying signs and symptoms and may also be treated differently.

Although many of the symptoms of rosacea appears to present itself in a physical form, there are many mental symptoms that come as a result of rosacea that are important to note. Rosacea can seriously impact a person’s quality of life, and can affect more than just their skin. Because rosacea is a chronic condition, there is no cure.

Many people report problems with their relationships, work, and ability to meet new people. Studies report that people who are living with rosacea experience feelings of frustration and embarrassment.  41% of people have stated that their rosacea has caused them to avoid public contact and cancel social engagements.

Surveys have also found that 70% of individuals with rosacea state that the condition has lowered their self-confidence and self-esteem. 30% of individuals with rosacea have stated that their rosacea has caused them to miss work in the past and 70% of people say that the condition affects their daily interactions in the workplace.

Due to the cyclical nature of rosacea, this may also lead to anxiety and depression in individuals living with rosacea.

There is currently no cure for rosacea, but research has found that rosacea is a combination of genetic factors and environmental factors. There are some known triggers for rosacea, including:

Although there is no cure for rosacea currently, treatment is available to help reduce (or eliminate) signs of rosacea on your skin, ease discomfort caused from a flare-up, and prevent rosacea from worsening. Treatment may include a combination of topical medications prescribed by a doctor, or oral antibiotics.

These topical medications and oral antibiotics help reduce inflammation, and repair skin. Steroids are also sometimes prescribed for ocular rosacea. For individuals with visible blood vessels, laser treatment can be an effective treatment to shrink them and make them less visible.

This laser treatment is conducted by a dermatologist and may cause pain and have side effects such as bruising, swelling and tenderness of the skin but complications usually disappear after a few weeks. Rarely do infections occur with laser treatment, but can be treated with antibiotics if it does occur.

Treatment is dependent on the individual’s type of rosacea and on what specifically triggers flare-ups. Most rosacea treatment plans may include some testing to understand what triggers a person’s flare-ups so the individual can know exactly to avoid.

How to Manage Your Symptoms

Your rosacea can be managed with gentle and rosacea-friendly skincare products. It is best to find skincare products that are oil free or water based without the harsh alcohol, fragrance, exfoliating agents, and menthol. The cleaner your label is, the better it is for your already sensitive skin.

What Ingredients to Avoid

There are many ingredients and even “remedies” out there that may actually irritate your skin further if you have rosacea. These include:

Tretinoin – tretinoin is a topical type of retinoid similar to vitamin A that some doctors prescribe to patients with rosacea. Retinoids may help reduce the appearance of the pus-filled, red bumps and are also known to irritate skin further and make broken blood vessels worse.

Benzoyl Peroxide and Salicylic Acid – these two ingredients are commonly known to treat acne, which makes sense if you’re thinking of treating your acne rosace. However, these two acne-fighting agents can be way too harsh for your sensitive skin and may increase the skin’s oxidative stress, and drying out of the skin, which causes inflammation, flare-ups and premature aging.

Exfoliating Acids – AHAs, BHAs, and glycolic acid are great for chemically exfoliating skin, but not for people that suffer from rosacea. The acids work to dissolve the top layer of your skin and remove dead skin cells. But if you are experiencing rosacea, then a common symptom is stinging or burning skin, which is something you don’t want to subject your skin to.

Witch hazel – research has found that 30% of patients with rosacea reported that witch hazel irritated their condition. Witch hazel may be a popular ingredient found in toners for some people, it is too harsh for people experience rosacea.

Rosacea is a common condition that affects the skin and is caused from genetic and environmental reasons. No cure is available yet, but symptoms can be treated and flare-ups can become manageable. It is important to identify what type of rosacea you have along with what specifically triggers your outbreaks with the help of a doctor.

By practicing a rosacea friendly lifestyle with the right type of products and daily habits, your flare-ups can be maintained with symptoms kept at bay, improving your quality of life.