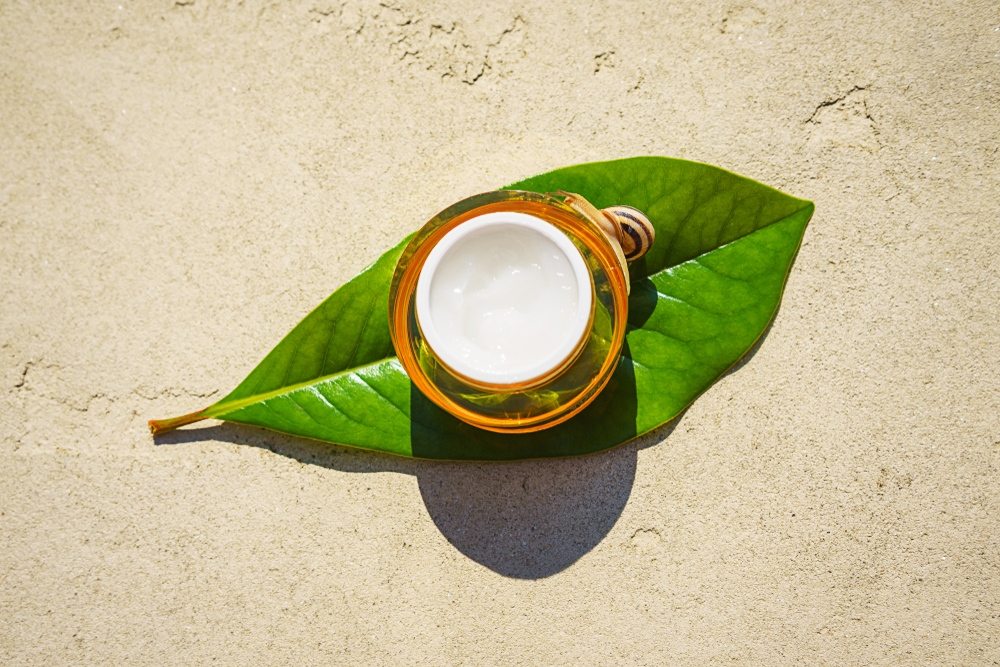 Chances are that if you’re into skincare, you might have come across the snail facial featuring snail mucin that has become popular in countries like Thailand, Korea, and Japan. If you haven’t, give it a quick google search because you’re in for a treat – but be warned, it’s not for the faint-hearted (if gooey snails freak you out)!

You wonder: why would anyone let a bunch of snails travel across their face? Well, these people are on to something: snail mucin has become raging in popularity because of its complex chemical composition and all the benefits it brings to your skin.

Some wonder if it’s just another trendy “it” ingredient to create hype but before we dive in let’s figure out what it is exactly and how it actually works!

What is Snail Mucin?

Snail mucin is the mucus excreted from a snail, or in other words: snail “slime”. There are two types of snail excretion. First is the “snail trail” left behind when a snail travels. The second type of snail mucin comes from the snail when it is under stress or feels threatened. This foamy secretion is what is collected for use in many popular skincare products like snail cream, serums, and masks.

In skincare, snail mucin can be found on the ingredient list as snail secretion filtrate or “SSF’. Snail mucin is an animal-derived growth factor, meaning it has regenerative properties because of its high molecular weight peptides. The growth factor supports tissue repair and speeds up the healing process in snails. When snails move, snails may move over debris or sharp edges that may tear or scratch up their tissue. The mucin produced helps them to repair and self-heal themselves and stay hydrated. Snails with broken shells are even able to repair themselves within a few days.

Snail mucin contains many beneficial properties that can be applied in skin care. The complex chemical makeup of snail mucin is the reason why it’s becoming such a popular ingredient in skincare products and launches in Korea and Japan. Allantoin, collagen, elastin, glycolic acid, hyaluronic acid, and natural antibacterials, glycoprotein enzymes and copper peptides are all compounds found in snail mucin. Spot any words you can recognize from popular skin care products?

The species of snail that mucin is collected from for cosmetic purposes is the Cryptomphalus aspersa also known as the brown garden snail, which are typically agricultural pests. But before you go hunting for snails in the backyard to give yourself a DIY snail spa facial, please reconsider! The snails used at reputable snail spas are professionally grown and the snail mucin is professionally purified, while the ones in the garden are not.

What Does Snail Mucin Do For Skin?

The following properties found in snail mucin all have different functions. You will often find each of these ingredients as a stand alone product in the store but snail mucin contains all of these, making it a one stop shop for all these benefits.

A 2013 study conducted on 25 participants with moderate to severe facial photo-damaged skin was given a solution with allantoin in it to apply to one side of their face, and a placebo solution was used on the other side of their face. Subjects noticed a significant improvement to their fine lines after the 8-week mark.’

Glycolic acid is also known for its ability to increase collagen, improve elasticity, and reduce the size of the pores on your face for a smoother, more flawless complexion. Glycolic acid can also work for those with more acne-prone skin types. It clears dirt and builds up debris in the skin and prevents future breakouts.

Snail Mucin: Does it Actually Work?

Although research on how effective snail mucin in dermatology is relatively limited compared to other skincare ingredients on the market today, the medicinal usage of snail mucin dates back to Ancient Greece. Hippocrates, known to be the father of medicine, suggested the use of snails to treat skin conditions associated with inflammation, such as burns, abscesses and other wounds.

Skip ahead a millennium and the medicinal use was scientifically proved for modern use. In the 1960s, Spanish oncologist Dr. Rafael Abad Iglesias was testing the radiation therapy for killing cancer cells on snails. The snails then secreted the foamy slime, that happens when they are disturbed or threatened and subsequently, the injured area on the snail healed quickly.

This led to his 1996 patent, recommending that snail mucin can be effective in treating skin ailments such as radiation dermatitis, all types of burns (including radiation, chemical, and thermal burns), slow healing wounds and ulcers, and to prevent UV radiation-induced skin cancer. In the patent, he also goes on to suggest that snail mucin is an effective treatment of wrinkles and stretch marks.

In the 1980s, farmers in Chile found themselves experiencing softer and smoother hands when handling snails for the French food market. The farmers also experience faster healing of any wounds and cuts on their hands at the time of handling the snails. The eldest son of the family, Dr. Fernando Bascunan then started his research and investigation into the cosmetic use of snail-mucin. This led to the creation of the first snail mucin-based skin care brand 15 years later.

Should You Try Snail Mucin?

Snail mucin has been proved to be effective for medicinal use and even more recently, cosmetic use. With all skincare products, it’s best to do a patch test if you’re wanting to test out snail based products because its effectiveness will really depend on your own individual skin needs. The way we see it, if it was good enough for Hippocrates, it’s good enough for us.